The Cleankill team was called in to solve a serious bed bug problem in one of the largest blocks of flats in London.

Thirty out of 600 flats in the block in South London had been infected and it was a case of finding the source of the problem before treatment could start.

Cleankill staff searched the flats and found an extremely serious infestation in the very last one they checked.

Bed bugs move in to bedsit

When Cleankill was called to a bed bug problem in South Kensington, London, technicians found one of the worst infestations they had ever encountered.

The building they were called to was made up of bedsits which all had sitting tenants. One of the bedsits (an area of approximately 14 feet by 16 feet) was occupied by a man in his mid-70s who lived in one room with his bed, wardrobe and armchair – all of which were heavily infested.

Last month I wrote about the problem of identifying who was at fault in cases of rented property and bed bug infestations. During the blog I alluded to the problem of ‘phantom biters’, something every pest controller has had to deal with at some time or other, and I thought this might be a good topic as Halloween approaches.

Renting property and the threat of bed bugs

Those of you who have been following my blog for some time will know I have a particular dislike for bed bugs. In March 2016, I wrote a long blog about how I’d noticed bed bugs has been taking over the news. To read that blog, click here. 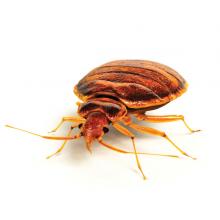 Last week we dealt with two horrific cases of bed bugs. It’s difficult to understand why landlords or letting agents would knowingly, especially in the first case, let out a property when there is a bed-bug infestation.