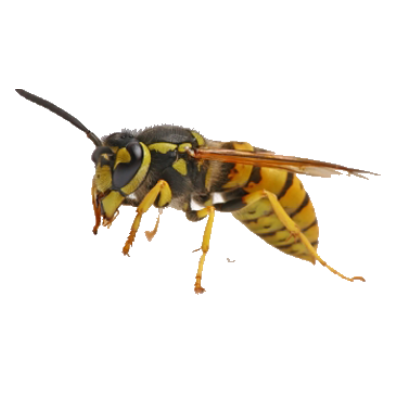 There are more than 200,000 species of wasp worldwide – the vast majority are solitary and harmless.  It is the social wasp species which cause problems.

There are eight social wasp species in the UK that look similar. Unlike honey bees, the common wasp has not evolved the ability to store food over winter and, in temperate regions including the UK, their nest colonies only last for one season.

Wasps can appear anytime in spring if the weather is warm enough and they will remain active throughout the summer. In the early spring, a young queen will come out of her dormant winter state and build a small nest about the size of a walnut.

To begin with the nest will contain 10 to 20 hexagonal cells and the queen will lay an egg into each one. As these hatch, the queen will busily feed the emerging larvae. Towards the end of May, these will have pupated and turned into workers who will start growing the nest and feeding the emerging larvae leaving the queen to concentrate on laying eggs. The larvae produce a sweet substance over their skin that acts as a reward for worker wasps that bring food back to them. By early September the nest will contain between 4,000 to 10,000 wasps.

Wasps feed their young on insect larvae and flies – which they will kill with their sting - and carrion such as dead rodents.  And, of course, the spare ribs and drumsticks that will be by the barbecue during the summer. They also have a liking for sweet things, and can damage growing soft fruits and young apples on trees.

As summer nears its end, special large cells containing the next generation of queens and breeding males will be made. Once these have reached adulthood, the workers have no more larvae to feed and become redundant. The workers still crave the larvae’s sweet reward, which is when wasps become a nuisance by crawling into coke cans, hanging around café bins and enjoying food we leave on outdoor tables. This is also when the wasps are at their most aggressive and most likely to use their nasty sting, often attacking anything moving too near to the nest.

How to identify a wasp nest

Wasps prefer dry concealed locations and this often brings them into conflict with humans as they will nest in places like loft spaces, roof cavities, window-sills, air bricks and chimney pots.

In spring, the nest will be quite small and may be hard to find. By late summer the nests will often be visible.

How to get rid of a wasp

It is easiest to treat a wasps’ nest at the beginning of the season, when the nest is tiny. A quick treatment with fly spray is all that is needed to destroy the nest. As the nest grows the treatment becomes more complicated. The wasps will have a direct flight path to and from the nest and, if you stand in the wrong place, they may well attack you.  If you suspect there is a wasp nest in your loft, then you need to be extremely careful on entering and do not switch the light on as the light will cause the wasps to attack.

If a wasps’ nest is established or in a difficult-to-reach place, it is far safer to call in a professional wasps' nest removal service.

Our pest control experts have a broad array of tools to help eradicate wasps from your home or business. Most nests can be treated quickly and effectively. Our wasp control service staff are skilled at tackling nests in even the most hard to reach locations.