The May Bug or Common Cockchafer. 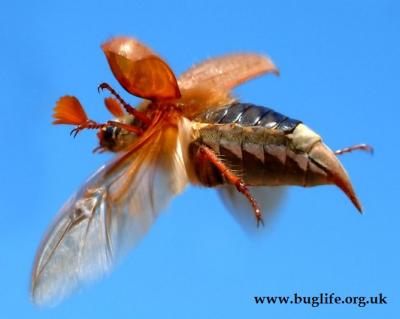 It has been a strange start to the year. As May slowly draws to a close, I have only just seen my first May bug. Once you have seen a flying May bug you won’t forget it; especially if one gets caught in your electric fly killer!

The May bug or doodlebug - Latin name Melolontha melolontha – known as the Spang beetle and Billy witch in Suffolk and the chovy, mitchamador, kittywitch or midsummer dor in Norfolk, is actually the Common Cockchafer.

What makes these beetles stand out, apart from the seemingly impossible feat of them being able to fly, are their unusual fanned antennae. The male of the species has seven leaves on each antenna, whereas the female has only six. The male uses these antennae to detect pheromones, meaning he can find a mate even in the dark.

The Cockchafer has long been a source of fascination for children. In Ancient Greece, it is described as a common practice for boys to catch a Cockchafer, tie a linen thread to its feet and then enjoy it flying in circles. A similar game is reported in Victorian England, when children would stick a pin through a wing to create a similar effect. The engineer, Nikola Tesla, recalls a childhood experiment where he caught four Cockchafers and, harnessing them in a similar fashion, created an ‘engine’.

In the past, Cockchafers were numerous around Europe – in 1911, 20 million individuals were collected from an 18km-squared piece of woodland. This was considered a major problem. Cockchafers have a voracious appetite and were considered a major problem for agriculture. In 1320, the city of Avignon, in southern France, put the Cockchafer on trial and banished them. When they didn’t leave, apparently no-one thought to translate the court-ruling into Cockchaferese, there were collected and killed.

This wasn’t such a problem as they have, at various times, been considered a delicacy. French recipes exist from the 19th century, giving instructions on how to make Cockchafer soup and in 1920s Germany, the newspaper, Fulda, reported children eating sugar-coated Cockchafers.

But the population of Cockchafers was decimated in the 20th century by the introduction of pesticides. By the 1970s, some areas had seen their populations nearly extinct. However, as people started to understand the dangers of pesticides – residues entering the food-chain and insect resistance – and usage has decreased, the numbers have slowly recovered.

The problem of crop damage still remains, however, and currently there are no pesticides licensed for Cockchafer management. Instead they use biological methods – adding pathogenic fungi or nematodes to the soil, which will kill May bug grubs.

At Cleankill we have always seen pest control as something that requires an ‘green’ agenda. It is too easy to liberally spray chemicals around, but there is always a knock-on effect. Apart for the danger of ‘collateral damage’, we can’t always guarantee only the pest insects will take the bait, using the wrong amounts of many chemicals will just lead to a tolerance build-up in the pest. The way many pest controllers have traditionally dealt with this problem is to just use more and more chemicals, but we’ve worked hard at trying to effectively target pesticides to reduce their usage and started to use traditional and environmentally responsible methods. For example, with bed bugs we now use a combination of residual insecticide and a diatomaceous insecticide – a natural rock that when ingested by the insects dehydrates them. In this way, we are not only effective at removing the problem, but also, we are greatly reducing the amount of chemicals left in the environment. It’s just part of our commitment to the environment.

So, when you next see a May bug, doodlebug, chovy or Billy witch, remember – however alarming it may look, it isn’t a cockroach, it isn’t going to sting you, and while it may do some damage to your garden, it won’t harm you. Then count yourself lucky, as in southern Germany is another type of Cockchafer, called the Large Cockchafer. I dread to think how this beast manages to fly!

PS. The Royal Navy has had four HMS Cockchafers in its history and before that hired another eight-gun lugger named Cockchafer.