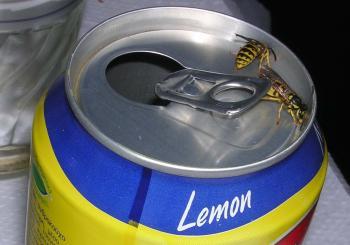 With summer predicted to return to the UK this week, pest control experts are issuing warnings about the threat of wasps disrupting barbecues and picnics.

In recent days, several national and local newspapers have carried warnings about a type of wasp called Vespula Germanica – the german wasp. This breed of wasp is slightly smaller than our common wasp but the sting still packs a nasty punch. At this time of year it’s a very aggressive wasp if you approach a nest.

However, whilst Vespula Germanica can present a problem at this time of year, the same is also true of all types of wasp. The problem is caused by worker wasps suddenly finding themselves without a purpose in life.

“Queen wasps have stopped laying and the worker wasp, whose task was to support the queen, suddenly finds itself without a job. At the same time, there is plenty of fermenting fruit around in orchards and hedgerows and so they get ‘drunk’. This emboldens them and they become brave enough to investigate the food possibilities of our barbecues and picnics. This leads to a rise in the number of stings amongst people at this time of year.”

Paul adds, if you are having a barbecue and you suddenly find yourself inundated with wasps, “the best advice is to stay calm. If you agitate them, they send messages to other wasps that they are under attack and you can end up dealing with a swarm”.

With an average nest can contain up to 10,000 wasps, this can represent a major problem. Incidents of people being stung and suffering anaphylaxis, which can be fatal if not treated quickly, are being reported throughout the British Isles and it is advisable to know the correct procedures should you find a wasp’s nest in your property.

Paul advises people to not tackle a wasp nest without the correct training and Personal Protective Equipment.

“It is extremely important that people don’t try to tackle large nests themselves as, unlike bees, wasps continue to sting without dying and send out signals to other wasps to join in. They have more of a hooligan mentality than other similar species and their instinct is to protect the nest. The best advice, is to call a professional pest controller, who has the correct training and equipment to deal with your nest problem safely and efficiently.”