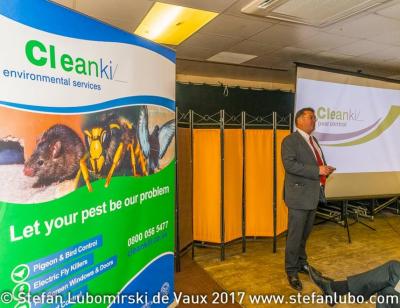 Paul started his speech by giving a general overview of pest control before looking at British attitudes towards the industry. He juxtaposed the examples of the US and the UK. In the US when people see a pest control vehicle outside of a property, they assume it is there as a preventative measure. In the UK, they automatically have a negative view, even though every business premises should have a preventative contract that involves several visits throughout the year.

Finally, he talked about some of the challenges of modern pest control, highlighting the increasing problem of bed bugs in terms of their spread and pesticide-resistance. He emphasised the importance of ‘due diligence’ when it comes to these invasive pests and stressed, once again, how important it is to maintain practices that focus on prevention rather than eradication.

Paul concluded his presentation with a warning about ‘cheap’ pest control. As he traveled to the event from his office in Croydon, he passed a sign for £35 wasp treatments. Paul spelled out the false economies of using companies that offer a cheap service but without the right training or insurance.

The Sutton United Business Club seminar and networking luncheon was held at Sutton United’s football ground on Gander Green Lane. The football club was established on 5th March 1898 and, in addition to be a successful football team with both a first team and a youth team, Sutton United also has strong ties to the local community with initiatives such as Community Fun Days and the Business Club. The team also organizes the local Metropolitan Police Safe Neighborhoods’ Team and, in 2010, earned the status of FA Charter Standard Community Club.