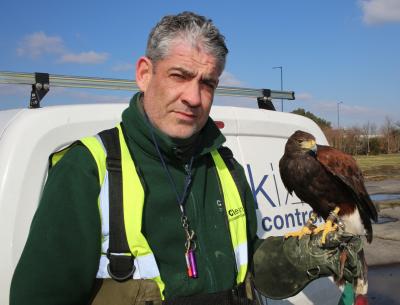 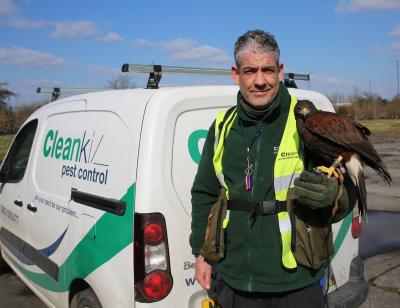 Cleankill Pest Control now has a bird on the payroll to help meet the demand from clients wanting natural methods of pest control.

Since six-year-old Luna the Harris Hawk joined the firm a few months ago her handler and Pest Control Technician Alan Day has been out and about getting her used to traffic noise and other unfamiliar sounds.

While Luna has been undergoing her own training, Alan has been studying for a professional Falconry qualification through LANTRA.

For Technician Alan it’s a dream job. “I’ve always flown birds as a hobby and my father used to breed them. To get paid to work and spend time with Luna is amazing. She is really effective and it’s impressive how pigeons will take off as soon as they see her.”

The use of predator birds is particularly suitable for places where customers don’t want netting or spikes. They are also perfect for sports stadia and open-air markets.

Alan explains: “Pigeons and gulls see the hawk as a predator so it’s natural pest control at its best. Managers of many of the new modern buildings being built in London are less likely to want nets and bird spikes as this can ruin the look of the new buildings. By flying the hawk on a regular basis, it still has the end result of removing the pigeons but doesn’t alter the look or structure of buildings. It usually will be at a lower cost to the customer as well as being environmentally friendly.”

Luna has been trained to return to Alan when he blows a whistle which signals that there is food waiting for her. Food consists of day old chicks, rats and mice – things that hawks would eat in the wild.

To book a free survey call us on the number above or e-mail info@cleankill.co.uk

With offices in Kenley in the London Borough of Croydon and Seaford, East Sussex, Cleankill Pest Control has been providing services across London and the South East since 1995.

Set up by former Rentokil employees, Cleankill Pest Control was founded upon the desire to create a company that placed customer service, respect for the environment, care for the community and staff development on an equal footing with profitability.

The company deals with ‘distress’ pests such as wasps and fleas, as well as preventative maintenance against public health pests such as mice, rats, cockroaches and birds. Cleankill prides itself on fast and efficient service delivery and aims to be recognised as a market leader for innovation, ‘green’ and new pest control techniques.