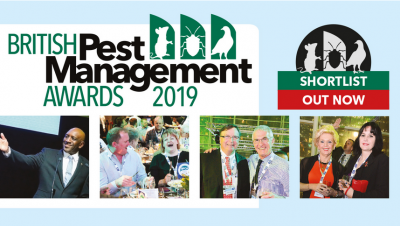 Cleankill Pest Control is proud to announce it has been shortlisted in four categories of the 2019 British Pest Management Awards (BPMAs). Organised by the British Pest Control Association (BPCA), the awards celebrate the role of pest control companies and the positive work they do to protect public health.

Cleankill has been named finalist in the categories for ‘Team of the Year’ and ‘Company of the Year’. In addition, employee Oliver Roe has been shortlisted for ‘Young Technician of the Year’ and Managing Director Paul Bates is in the final three for ‘Unsung Hero’.

Commenting on the nominations, Paul said: “To be recognised at a national level by the BPCA is a real honour. Apart from the pride I feel for the two company award nominations and my own, I am extremely pleased to see Oliver’s achievements being recognised. To be acknowledged as one the three best young technicians in the country is a real triumph for him.

“Entering these industry awards give us the opportunity to gauge our successes on a national scale. At a time when Cleankill is expanding into new territories, with the acquisition of Good Riddance Pest Control, Pest Control Bucks and Bird Control Sussex, it is important for us to stay focused on what makes Cleankill such a special business. These awards certainly help us to do that.”

Being held for the second time, the BPMAs are presented at a special ceremony at the end of day one of PestEx – the largest gathering of pest control professionals in the country. PestEx will be held at Excel London – 20-21 March 2019.