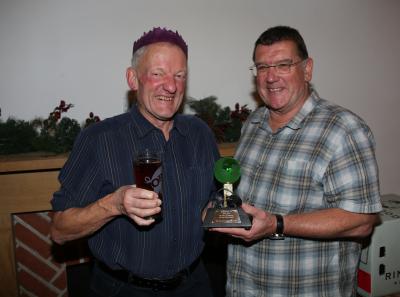 Phil started his career with Rentokil in 1977 as a technician and then field biologist and a supervisor, before joining Cleankill in 2001.

At Cleankill’s recent staff conference, Phil was presented with a specially commissioned trophy featuring two rats and a globe to represent his love of travelling. The inscription said “Presented to Phil Nye on the occasion of his retirement. The rats can now sleep easy.” Phil also gave a talk about how things had changed since he started his career.

“Phil was a real asset to the company. He was excellent at training new staff, who we wanted to mirror his attitude and knowledge.

“Phil eased gradually into retirement reducing to four days at age 65 and then three days a week at 68. He originally covered London and in the last few years worked in Hampshire, Sussex and Surrey.

“We never had any customer complaints – only compliments – and he was definitely one of the best technicians in the industry. He will be missed.”

Cleankill was founded in 1995 and, by 2001 when Phil joined, we employed seven staff. We now employ 50 staff and, as a multi award-winning company that has seen year on year growth, we have several thousand clients throughout London, Bristol, Buckinghamshire, the South East and across the UK.

Cleankill is the only pest control company in England to achieve and retain the Gold Investors in People accreditation.