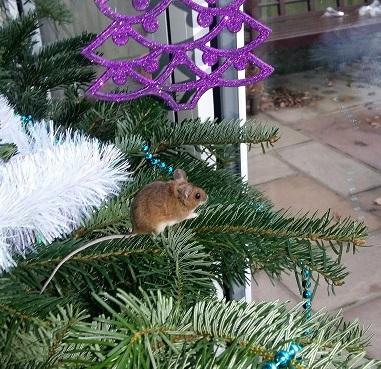 Before you worry, this is not going to turn into something starring Robin Asquith. In fact, I think I should let my partner, Sandie, tell the tale:

I was never a cat person until, about seven years ago, my children persuaded me to get two kittens. Cookie and Dizzy, brother and sister, are now part of the family and, despite the occasional 'present' of a live mouse or, even more delightfully, its bloody remains, I have grown to love the cats.

This week, however, cat ownership has lost a lot of its shine.

It all began on Monday morning when I came downstairs to find Dizzy sitting on my new sofa poised and staring intently into the tiny gap between the cushions.  I knew immediately from her body language and different ‘meow’ that she had brought in a mouse. Roughly translated, she was saying, "I've brought you a present but it's currently in the new sofa".

At this point, a cute little field mouse popped its head out of my new sofa. Okay, so my partner, Paul, may be the Managing Director of Cleankill Pest Control, but it doesn't mean I don't freak out when there's a mouse IN my sofa! Quite hysterical, I screamed and squealed enough to raise even a sleeping teenager.

"Eeeeeek! There's a mouse in the sofa!"

Then I remembered, Paul had told me that his technicians often bait mouse traps with peanut butter - it is truly romantic what pest controllers discuss over dinner! So, armed with a lid temptingly smeared with peanut butter, we tried to persuade the mouse out.  Several times it peeked out but, each time we moved towards it, it scuttled back into the sofa.

Naturally enough, by the time I had to go to work, no professional pest controller had replied to my squealing voicemails because, apparently, they are far too busy with other people's pest problems! In the end, I left my teenage son hovering near the couch and went to work. By the time I came home in the evening, The Professional had answered my call, called round, set traps, caught the mouse, and, once more, my sofa was mouse free.

However, on Tuesday morning, I came downstairs to find Cookie with his ears alert and giving the unmistakable, "I've brought you a present but it appears to have escaped into this beautifully decorated tree,” stare. MY CHRISTMAS TREE!

Cookie and I both encircled the 7-foot tree and, yes, something rustled in the higher branches.  Practically in tears, I call The Professional and left several hysterical woman messages - "Where are you when I need you? There's a mouse in my Christmas tree!" Apparently, they were still too busy with other people's pest problems to answer!

(Paul: I did say we were getting lots of calls from people with rodent problems because winter is approaching - see here and here.)

While I watched and wondered if, the not very svelte, Cookie would launch himself at the Christmas tree, a little face peeped out and there is a (I can't say the adjective I used) mouse sitting on a branch of my tree. I took a photograph, only cute in retrospect, to prove to Paul that I was not making this up, but was still somewhat hysterical and I still had no idea what to do next, when...

Like a scene from Tom and Jerry, the mouse appeared on a lower branch, next to a sparkly bauble. Cookie saw it and launched himself at the tree, flicking the branch with his paw. Mouse and bauble fly impressively high into the air and Cookie skids off across the floor in hot pursuit. His enthusiasm undiminished by my hysterical screaming, Cookie chased the mouse under the sofa, under the dining table, around the tree and, finally, caught the mouse by its tail. Like a returning hero, Cookie then brought his spoils of war to lay before his mistress.

More squealing from me as Cookie was ungratefully ushered out of the back door and immediately tried to get back in, bearing his gift, via the cat flap. It was hastily locked.

There was a happier ending for this mouse, as a downcast Cookie, his eyes momentarily taken off the prize, lost control and the mouse escaped under the garden fence. I was happy, because my tree was still standing and was now mouse-free. The only person to show any disappointment, apart from Cookie, was The Professional, who was rather disappointed I hadn’t had the forethought to film the cat flicking the mouse into the air!

"Pity you didn't film that, would have been interesting for the Cleankill website".

Paul: while I was obviously disappointed not to have some great footage of a flying mouse to upload to the Cleankill website, it was nice to see that my years of finely honed pest-catching skills were, ultimately, more successful than mother nature’s! After all, I didn’t let my rodent escape under the garden fence!

This cautionary tale does go to show how difficult it can be to keep rodents out of your home during the winter, even with skilled hunters like Cookie and Dizzy on the job. It is often a good idea to get a professional in to help you – especially if you have animals or children around the house, because it is not advisable to have rodenticides lying around your home.

And now it is time to wish you all a Merry Christmas and a Happy New Year!

But, I hear you ask, where is the ‘cute mouse on a Christmas tree’ picture? Well, as it’s Christmas...