One man and his fox 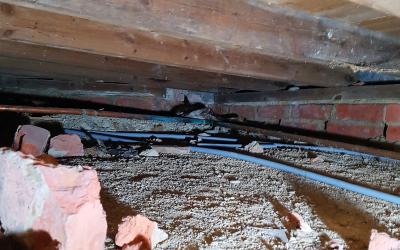 When a customer called us to help solve a mysterious smell that was beginning to seep through the house we didn’t anticipate quite such a challenging job.

But the Cleankill team is never afraid of a challenge even though the situations we find ourselves in sometimes would make you come close to vomiting.

As you can imagine, the void was less than two feet high which meant belly crawling in with torches. As we entered, the stench became nauseating and, of course, the stench was emanating from the area furthest away from the entry point.  After a lot of wriggling and swearing, we finally reached the source which turned out to be a dead fox. The animal was decomposing and covered in maggots and flies, which made removal particularly unpleasant.

If the client hadn’t called us when she did she may well have had a nasty fly infestation – flies entering the house after feeding on a dead fox carcass would not have been good.

We think the fox had found its way through a hole in the foundations and then couldn’t find its way out – or perhaps it became ill.

The client was very relieved and pleased that we were able to solve her problem.

For us – it was just another day in the office and one of those jobs we won’t forget for a while.