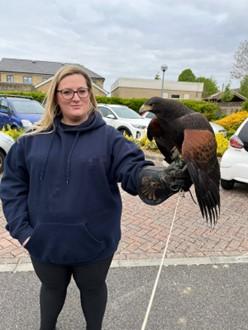 Samantha has been with Cleankill since June 2017, starting as a service administrator and then progressing to senior administrator and now administration supervisor. She oversees the team, ensuring requests and enquiries from customers are dealt with in a timely and customer-focussed manner.

Sam works closely with the bird team, ensuring requests are logged, appointments are made and access equipment – cherry pickers, MEWP’s (mobile elevated working platform), etc. – are ordered and delivered to site. She’s even been known to foot a ladder or two!

Recently she spent a couple of days out with the bird control team, learning what their job involves. Here’s what she had to say:

I’ve noticed a big increase in call outs for bird problems in the last couple of years. I don’t know if this comes from more birds or greater intolerance of pigeons, gulls and parakeets. The jobs range in size from a parakeet in a stadium lighting structure to pigeons and gulls roosting on the rooves of office blocks and buildings in retail parks.

Yes, these birds are a nuisance, leaving unsightly deposits down walls and windows. A bigger problem is they can also be a threat to human health, not least because their droppings can be a slipping hazard. They also spread disease, as in the terrible case from 2019 when an infection linked to pigeon droppings was found to be a ‘contributing factor’ in the death of a child at a hospital in Glasgow.

Now, I like to think that over the years I’ve picked up quite a lot of knowledge about bird control, especially proofing. But knowledge picked up during my working day isn’t the same as hands-on experience.

My day out with Tony started nice and early. Our first job was on a housing estate, and we arrived just after a nasty accident… 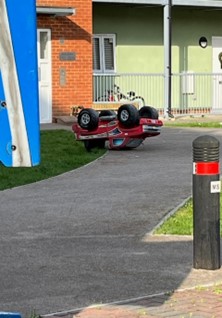 Luckily, it didn’t look like anyone was seriously harmed!

Our mission was to carry out some netting on a balcony in the estate to stop pigeons. This wasn’t Tony’s first proofing work at the site, having done another flat in the building a few months previously. He therefore knew what materials and tools he needed and quickly got on with the job. 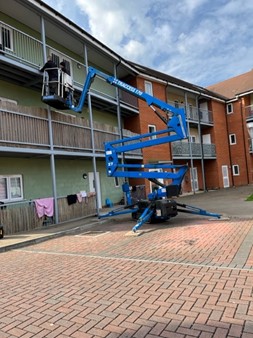 Tony talked me through all the steps he was going to take to complete the work before starting, and then gave me a commentary as he did it. This gave me deep insights into not only what he was doing, but why he was doing it.

It was great to see the spider in action. Part of my normal role is to hire the equipment and ensure it is delivered to site for the technicians to use. It was therefore great to see it in action. It also made it clear to me how vital this equipment is for ensuring a job is done properly and safely.

When Tony had finished the netting, I was surprised at how invisible it was from a distance.

As we were leaving, another tenant came to ask us about bird-proofing as she was now having problems with pigeons. We told her to report the problem to her managing agents, who will then contact us. So, it looks like Tony might be back again quite soon!

Our final job of the day was to fit a pigeon valve to the roof of a building in Croydon. This allows trapped birds to escape. I helped foot the ladder to make sure Tony was safe as fitted the valve. He then returned a few days latter to check the roof space was clear, clean up the detritus and ensure the space was properly proofed.

While I like to think I knew a little bit about proofing before I spent the day with Tony, the same could not be said for my day with Richard, a member of our falconry team. Up until a few months ago, I still thought the hawks were used to capture and kill the pest birds. I was wrong!

Like Tony, Richard really took time to explain to me everything he was doing and answer my questions. He explained how they train and look after the birds, their different personalities, the different tasks they carry out and the moulting season. Another of the Harris hawks, Elvis, is currently in moult and so he can’t be flown.

On our day out we were working with Willow the Harris hawk. She’s still in training herself, and so Richard started out by saying she wouldn’t be flying free (untethered). Instead, she is always connected to Richard via a long, thin line – a creance.

Richard began by weighing Willow. It is important to weigh the birds as if they are over-weight they may decide to sit on top of a building or tree and refuse to return to the falconer’s glove for food. She was then placed onto the roof of the van and Richard walked away. Ensuring she could see his glove with a piece of chicken on it, he whistled to her and she flew straight to his hand. When he then aimed his arm back towards the van and lifted it, she flew straight back. He repeated this a few times.

During the day, we visited three different sites. Each had its own infestation problems but what was really interesting was how they used Willow in different ways to get the job done. What is clear is, the other birds do not like it when a hawk turns up!

As I said, until recently I thought the hawks caught the pigeons or gulls, but this is 100% wrong. Their presence alone is enough to cause distress for the pest birds and so, when they are flown and used in combination with an audible bird scarer, the resulting concern means they fly away.

The highlight of the day for me was wearing the glove and holding Willow, which Richard encouraged me to do. I was amazed when Willow did as she was commanded, flew to my hand, retrieved her chicken and flew back to the van. If I’m honest, I was a bit nervous, but it was brilliant.

I learnt so much about the falconry team – Alan and Richard – during my day. I was amazed at how effective they are and, at a time when everyone wants to be greener, it was great to see pest control measures that didn’t harm the other birds but did get the job done.

Overall, it was great to see how the technicians in the field do their job. I felt I got a lot out of it, which I can then use in my interactions with customers.