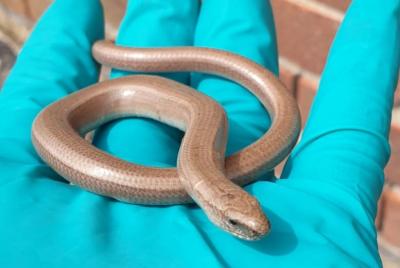 Pest control technician Sam Boylett found more than he bargained for when opening a bait box at a site in Shoreham, West Sussex. During a routine inspection, Sam opened what should have been an empty box to reveal a snake-like slow worm.

It’s forgivable to look at a slow worm and think it is a snake but, in fact, they are very different. Slow worms, Anguis fragilis, are better described as legless lizards. They are found all across Great Britain, but not Ireland (perhaps St. Patrick also mistook them for snakes?!?) and they differ from snakes in several ways. Firstly, they have eye lids and ear openings. Secondly, their heads are small and the same size as their bodies.

Unlike other reptiles, they don’t bask in the sun. Instead, they prefer humid conditions and tend to emerge from their hiding places only at dusk or after rain. You will tend to only see them between March and October because they hibernate throughout the winter.

It’s important to say, they are harmless to us and our pets. In fact, we should be encouraging them into our gardens because they are natural pest controllers and like a diet of slugs, snails, insects, etc. Interesting facts about the slow worm include the fact they can detach their tail if attacked (it will not fully grow back) and they probably live longer than any other lizard (up to 30 years outside of captivity.

Slow worms are protected under the Wildlife and Countryside Act 1981, which means Sam needed to reconsider our approach to pest control after his discovery. The property borders a railway line, which provides lots of foliage and earthy soils in which the slow worm can hibernate and hunt. Liminal areas like this are great places for wildlife because they are largely left undisturbed. The problem for us is that the wildlife which likes to exploit these areas can include public health pests. We therefore placed boxes along the fence line to stop infestations by rats.

One of these boxes was being used by the slow worm to shelter from the sun. Problematically, however, the box could also endanger the slow worm. Therefore, Sam had to find a way to continue effectively protecting the property while reducing the potential risk to the slow worms. After careful consideration, he was able to remove the fence line boxes while ensuring boxes in high-risk locations could be accessed all year round.

We pride ourselves on providing effective pest control solutions that consider the needs of the client and the potential impact of any treatment on the environment. Our comprehensive range of environmentally considerate solutions cover all main nuisance and public health pests, including mice, rats, cockroaches, wasps, fleas, squirrels and birds.

With offices in Surrey, East Sussex, Bristol and Buckinghamshire, Cleankill has many customers throughout London, Surrey, Sussex, the Home Counties, Bristol, Gloucestershire and Somerset.