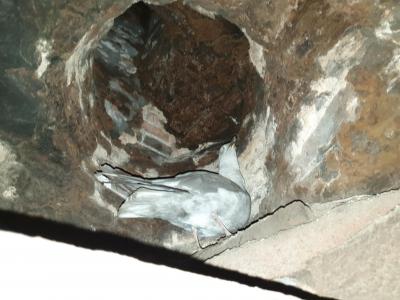 A Bristol pest controller faced an unusual challenge this week when he had to rescue a fully grown seagull from inside a chimney.

An employee of the Bristol Registry Office happened to venture into the lower area of the building where the old prison cells used to be when he heard a noise.

He called Good Riddance Pest Control, which has a contract with the registry office, and technician Wayne Gurney turned detective and went to investigate.

Wayne realised there was a bird stuck in a chimney and set about rescuing it. He had to put his hand inside a small hole which was risky and not easy.

Wayne was very surprised to find that the trapped bird was a large seagull. He managed to rescue the bird and once he had checked it over for cuts, while being pecked, Wayne took the seagull outside to be released.

It is the first time in 15 years as a pest control technician that Wayne has had to rescue a large seagull – although he has come across much smaller birds that have needed help.

He said: “It was quite an experience to rescue such a large bird. I think it could have been there for at least three or four days. Pest control is not just about getting rid of pests, we like to look after wildlife whenever we can.”

Cleankill Pest Control Managing Director Paul Bates said: “We are very proud of Wayne and his actions. To rescue and deal with such a large bird close up would have been very challenging. It’s a great example of our staff dealing with a situation professionally and with compassion.”

Good Riddance is part of the Cleankill Pest Control group of companies. Cleankill Pest Control has been providing pest control services to Bristol, London and other parts of country since 1995. Set up by former Rentokil employees, Cleankill was founded upon the desire to create a company that placed customer service, respect for the environment, care for the community and staff development on an equal footing with profitability.