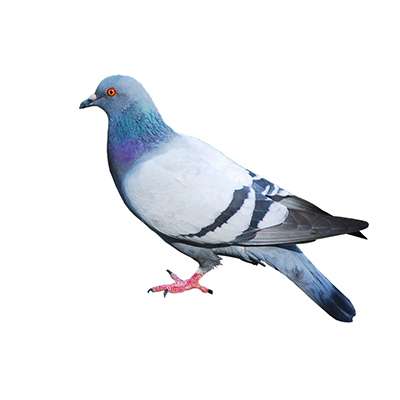 With a warm spell of weather predicted, staff from Cleankill Pest Control are gearing up for more calls to deal with the bird they call the ‘flying rat’.

Pigeons take advantage of the warmer weather to sit on outside ledges and pipework while their foulings fall to the floor below, creating a dangerously slippery surface.

Cleankill Managing Director Paul Bates said: “With pigeons now breeding four or five times a year, compared to two or three times 20 years ago, their numbers are increasing dramatically. The problem is exacerbated by people feeding them and attracting them into town squares where they are fouling on pavements and buildings.

“Pigeons are the most unhygienic and messy birds and actually carry more diseases than rats. They nest on their poo and attract mites. Nearly all pigeons carry the bird mite - a tiny insect that feeds off the bird, but will also makes humans itch and scratch. Pigeon fouling and nest materials also provide a home for many other insects such as clothes moths, carpet beetle and mealworm beetles.

Most of the pest controllers’ work against pigeons tends to be proofing of buildings and light wells, using a variety of techniques including installing nets, sprung wire systems and bird spike repellents.

Paul explained: “If a slipped tile goes unnoticed on a roof, or the louvres slip on a church bell tower, a pair of pigeons can get in and, in a matter of months, there can be hundreds of pigeons living in the loft space. The floor will soon be covered with fouling up to a foot deep.res further ‘natural-style’ habitats for these descendants of the Rock Dove - ll then have health and safety implications for engineers who come to service the equipment.

“Pigeon poo, when it is wet, is not too much of a danger apart from being slippery and the acidity will, of course, burn car paintwork. But when it is dry, as it often is in a loft space, or below sheltered machinery, then the airborne bacteria can become a real problem – affecting anybody that may be susceptible to asthma and other breathing difficulties.”

When pest controllers are called in, wearing special safety gear, they have to remove the birds, the nests and all loose fouling. The places they have to get to are often difficult to access, very restricted, very hot loft spaces that are about four-feet high - which is one of the reasons they dislike pigeons so much.

Cleankill Pest Control offers a specialist bird control service for facilities and property management companies in London, Sussex. Surrey and Kent, from the initial survey and specification through to the final proofing solution. As registered waste carriers, Cleankill can carry out full scale removal of bird fouling, as well as contaminated goods and furniture, from infested properties. As well as the feral pigeon, seagulls are becoming a greater problem for property owners and Cleankill can also offer advice and solutions for these pests as well.

Press enquiries: For more information or to arrange an interview contact Suzi Christie on 01435 830031.

Some facts about pigeons:

• A pigeon’s white feathers have no colour pigment

• Pigeons can see in colour, but can also see ultra-violet light – a part of the light spectrum that humans cannot see

• In the 16th century, pigeon poo was a highly valued commodity as it was a source of salt petre or Potassium nitrate - a main ingredient of gunpowder! In France, it was also used to fertilise vineyards

• In India, the pigeon post mail service stopped in 2004

• Young pigeons remain in their nests for up to two months…which is why it is only pest controllers who often get to see them!

• Peregrine Falcons are a natural predator of the pigeon…they can dive at up to 200 miles per hour. A pigeon can dive at about 70 miles an hour.