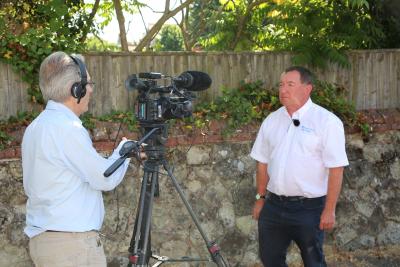 Cleankill staff realised there was something different about the behaviour of the ants when they were called in to treat two properties and called on specialist expertise help to identify the ants.

Cleankill Pest Control’s Chris Davis explains: “We realised early on that they weren’t ordinary garden ants and have treated accordingly. We are only treating two properties but we suspect there are many more affected. A wide-scale management programme is needed or they will just keep spreading further afield. Treatment for this type of ant is expensive and the environmental impact also needs to be considered. It’s a real dilemma and we feel for those who are being affected.

“There is a risk of the ants spreading further if people move plants and soil from the area and they transport a queen ant. The problem is that people haven’t been made aware of this and there are no restrictions at the moment.”

Invasive garden ants are also known as ‘Electric ants’ because of their attraction to electricity cables and junction boxes.  This has been known to lead to blackouts and fires, causing considerable damage – the University of York has estimated that ‘electric ants’ could cost the UK £1.7bn every year through damage and management costs.

The colony discovered in Eastbourne is very large, covering several residential streets. It is the latest colony so far discovered in the UK, following identified colonies in Essex, London, Norfolk, Cambridge, Yorkshire and Suffolk. This non-native species was first identified in the UK at the National Trust’s Hidcote Manor – a colony of 35,000 ants was found in a junction box.

With over 13,000 types of ant in the world and many of them looking very similar to less destructive ant varieties, it is sometimes hard to identify ant species.  For example, the electric ant looks very similar to the common black garden ant.  Tt is important to get the identification correct before any treatment starts.

Cleankill is also warning people to be on the lookout for wasps’ nests. Now is the perfect time to call a professional pest controller to remove a wasp’s nest before it gets too big. As this lovely summer continues, these colonies will get larger and more difficult to deal with and, with larger colonies, comes an increase in the problems associated with wasps: see here.

To learn more about the differences between wasps and bees, click here.

Photograph: Chris Davis being interviewed about this story on ITV Meridian News. To see it, click here.