Cleankill comes to the rescue of 11th Purley Scout Group 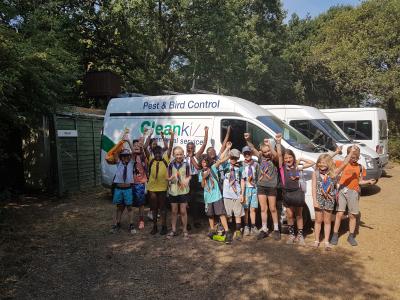 Cleankill Pest Control stepped in to help the local 11th Purley Scout Group after a van hire company informed them at the last minute that they could no longer supply one of the vans required for the annual Scout Camp.

Step forward Cleankill Operations Director, Jonathan Whitehead, who looked at their fleet of vans and realised, with a bit of reorganisation, they could supply the necessary vehicle. Once he had identified a suitable van, it was emptied, cleaned and disinfected. This included the removal of pigeon fouling from a recent job – Cleankill is a registered waste carrier and can professionally deal with a wide range of pest problems, including avian waste.

With a full complement of vehicles the Scout Group was able to leave on time and, by all accounts, had a wonderful time on the Isle of Wight.

Cleankill’s Managing Director Paul Bates, has a long association with the 11th Purley Scout Group and is now Cub leader.

Commenting on the tale, Paul said: “It was great for Cleankill to be able to provide a suitable vehicle at such short notice. I’d really like to thank Jon for his efforts in making sure the van was emptied, cleaned and ready. Without it, we would have found it very difficult to transport all the Scout’s equipment, but, as it was, the whole trip was a great success – helped in no small part by the tremendous weather!”

Paul first became involved with the Scouting movement in 1983, despite never having been a Scout or Cub. He became involved when he heard the 11th Purley Scout Group were going to be forced to close due to a lack of leaders. His dedication to the organisation has even been recognised with the awarding of the Chief Scout’s Medal of Merit for Outstanding Service to Scouting.

To learn more about Cleankill’s commitment to the community, click here.