Supercars, Super Charity and The Stig 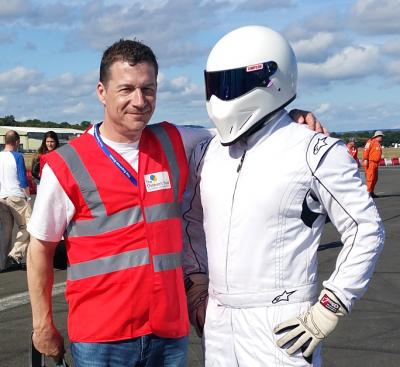 A quick question: where can you find over 170 supercars in one place, on a mostly sunny day at the start of July?

Billed by the organisers as the biggest interactive supercar event in the UK, The Supercar Event is now celebrating its tenth year. It started with a twelve-year-old girl from Crawley waking from a coma when doctors turned off her life-support machine. That girl, Becky Groves, was left without the ability to walk, talk, or do anything for herself but, upon leaving hospital, she was transferred to The Children’s Trust facility at Tadworth Court, where she received a bespoke rehabilitation programme. Her improvement has been so pronounced that, last year, she achieved 16 vocational qualifications and a GCSE. She is now looking to get some work experience in The Children’s Trust’s shop in Crawley.

Richard Davis, a family friend of the family, was so inspired by her determination and the efforts of The Children’s Trust, that ten years ago he organised a group of Ferrari drivers to visit Tadworth Court and give free drives to children, family members and staff. The event has since gone from strength to strength and in 2015 16,000 people visited the event, raising over £120,000. This brings the running total to over half a million pounds, since the first event.

For 2016, over 175 drivers brought their supercars to the Top Gear testing track at Dunsfold Aerodrome in Surrey. These drivers supply their cars, fuel and tyres, free of charge in order to support the charity and get the chance to play at being The Stig. Visitors then pay to be driven around the track in these exceptional cars and it is estimated that over 2,500 passenger rides were taken across the weekend - covering around 6,300 miles. Cars included: Ferraris, Lamborghinis, McLarens, Porsches, Dodge Vipers, Mustangs, and a Metro 6R4 - once owned by the late great British rally driver, Colin McRae.

The show was hosted by Craig Phillips - builder, charity fundraiser and winner of the very first Big Brother – but I don’t think he’ll mind me saying that the real draw for the crowds was: The Stig. Even I got my photograph taken with him. When not being photographed, he spent his day driving people around the Top Gear test track in a Nissan GTR. I said before that the drivers bring and operate their cars for free because the whole event relies upon volunteers and this is where I came in. It was my first time visiting the event, but it was obvious from talking to my fellow marshals that this is has become an annual event for many of them. In total, the two-day event needs around 350 volunteers to run safely and successfully and I was very happy to give my time for such a worthwhile cause.

I have been a long-time supporter of The Children’s Trust and with other Cleankill staff have helped, over the years, raise money and decorate parts of Tadworth Court. When I heard about The Supercar Event, I knew it was something I would love to volunteer for but, unfortunately, I was only able to volunteer for one of the days. It was a great to be involved and, thankfully, the weather stayed mostly fine – I’m trying to forget the brief rain storm. I heard at the end of the end of the event, that they had smashed their £120,000 total from 2015 – raising £150,000 across the two days.

With Cleankill’s long association with The Children’s Trust and Tadworth Court, I think it might be worth getting a team of volunteers together for next year. After all, volunteering for such a valuable charity is always a good thing but, when the day also includes the chance to meet The Stig, who can resist?