A nice plate of ant salad? 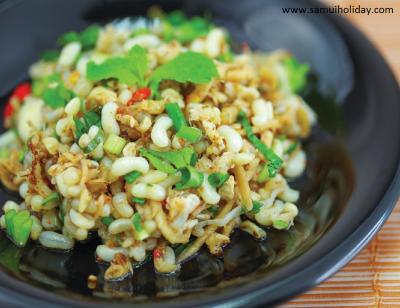 While in this country we are keen to eradicate pests, our views are not always shared by other cultures, either historically or geographically. Things we view as pests, are not always viewed as pests by others. It make me wonder what other uses there may be for creatures we would rather never hear of again.

When something is in plentiful supply, and one of the problems with pests is that they are often in plentiful supply, it is perhaps better to think of a use for it, rather than simply destroy it. An obvious starting point is eating it. Ants, even today, are considered part of some traditional diets. While you may be annoyed by them traipsing across your kitchen work surfaces, others may be eating their eggs as ‘insect caviar’ (Mexico), toasting them alive and eating them (Colombia), or making a condiment for curry from one of their excretions (India, Burma and Thailand). In Thailand, you might also find ant eggs and larvae added to a salad to give extra protein. Today, some areas of Japan still consider a fried bee or bee larvae to be a delicacy, which, as with so many things, is considered an aphrodisiac.

Another common use of bugs has been in medicine. The writer Lafcadio Hearn claimed that, as recently as the 1870s, the people of New Orleans still swore by a remedy of boiled cockroach tea. Earlier still, writers, including the Islamic polymath Abu Hanifa ad Dainuri, wrote up various recipes for medicines which required the grinding of cockroaches into oil or water.

In South Africa, South America and India, there is also evidence that biting ants were used in the period between 9,500BC and 1,000BC to hold together wounds. The ants were encouraged to bite across the wound and then the bodies are detached to leave the ‘stitch’ holding the cut together.

Today in developed countries, the maggots of blowflies are used to clean out the dead flesh from a wound. They will also disinfect the area and stimulate skin regrowth. Since 2004 the FDA in America has authorised various treatments using sterilised maggots.

Even the bane of many pest controllers life, the bed bug, was thought by ancient Romans, including Pliny the Elder, to have value in treating ailments such as snake bite and earache.

Creepy crawlies and vermin are obviously not something we like to encourage into our homes. At the very least they are an irritant, at the worst they can be harmful. But our view on them often tempers our judgement. For centuries, the rat has been blamed for the spread of the bubonic plague, but recent research in Oslo has shown that the far cuter Asian gerbil is probably to blame.

Now, I doubt any of you are going to swap your cute pet gerbil for a rat, and that’s probably sensible because the Centre for Disease Control, in the US, does still list nearly a dozen diseases directly linked to rats. It does make me think though, that while we don’t want these nuisances in are homes and places of work, there is always more we can learn about them and from them.

But, whatever Pliny the Elder says, I still can’t think of many positive things to say about an infestation of bedbugs.

If you would like to try eating some insects, come and see us in Kent on Thursday at Kent2020 and at Let’s Do Business in Brighton on the same day. You could even win a bottle of champagne if you take the best selfie eating a bug and post it on our Facebook page.